Last October, when Kenyan legend Eliud Kipchoge broke the two-hour marathon barrier, not everyone viewed it as a triumph of human endurance. The scepticism about Kipchoge’s new Nike Vaporfly shoes —they had never before seen carbon plates, patented foam and air pods—almost undermined his outstanding effort. While allegations of ‘technology-doping’ flew thick and fast, track-and-field officials were conspicuous by their silence.

Meanwhile, encouraged by the worldwide publicity of the run that the marketing men labelled as marathon’s Roger Bannister moment, Nike has now come up with a sprint shoe that is leaner and flatter than the marathon version and has a carbon-fibre plate running from the toe to mid-sole only. This time, however, World Athletics is expected to put its foot down.

It is reliably learnt that the world body, presently studying the new-age footwear, will soon come up with shoe-regulations. “A working group, consisting of technical officials, athletes, health and science practitioners and legal experts, are reviewing the issue of shoe technology and the wording around the rule. We hope to make their findings available early in the new year,” World Athletics said in a statement.

Explained: Can man run 100 metres in 9 seconds? Spikes may have the answer

Nike is yet to comment on the development, but if the advances in the sprint version of the shoes mirror those for the marathon version, there is reason to believe that it could help in the taking down of the most famous record in track-and-field — Usain Bolt’s 9.58 seconds in the 100 metres.

Athletics Federation of India president Adille Sumariwalla, a former national 100m champion, feels shoes have become too complex these days and it would need scientific research to ascertain what kind of advantage they give to marathoners and sprinters.

“Today, there are too many moving parts in a shoe. It needs an open healthy discussion and extensive research. In case there is an advantage, it also needs to be seen how we are going to treat the records if there is a significant advantage (because of latest shoe technology). It is a very detailed debate. Would you simply wipe off a record of Usain Bolt because someone has been aided by a spring (technology) in the shoes? In my view, a superhuman effort like 9.58 seconds cannot be removed from the books if someone runs wearing shoes with springs,” explains Sumariwalla, who insists that he isn’t wearing the hat of an World Athletics council member while saying this.

It is widely believed that the only way Bolt’s record can be improved upon is if a sprinter manages to reduce the ground-contact-time for every stride. There is growing suspicion that the new Nike spikes could have the potential to aid a young sprint sensation like World No.1-ranked American Christian Coleman (best of 9.76s) move closer to the Bolt zone. The effectiveness of the Nike marathon shoe—there is talk that it improves efficiency by 4 per cent —saw a spurt in its sales. With the Olympics scheduled for later this year, sprinters too would be queuing up to sign up with Nike or use its spikes.

One of the vocal sceptics of Kipchoge’s feat is Yannis Pitsiladis – a professor of sport science with the University of Brighton – who had launched his own sub-2 marathon project before Nike marketed it on its own. “I have known Eliud for many years and this attention could not have happened to a better person. He probably does believe he created history because in and around him, people have been playing that narrative again and again. But he did not break the two-hour marathon barrier – he ran the distance of a marathon in less than two hours under contrived conditions. They (INEOS, sponsors of the event) kept on comparing his success to Roger Bannister’s four-minute mile but there’s no comparison to that feat. It is the best marketing of a shoe ever done in history…,” Pitsiladis told The Indian Express in October shortly after Kipchoge’s feat.

For all the latest Sports News, download Indian Express App 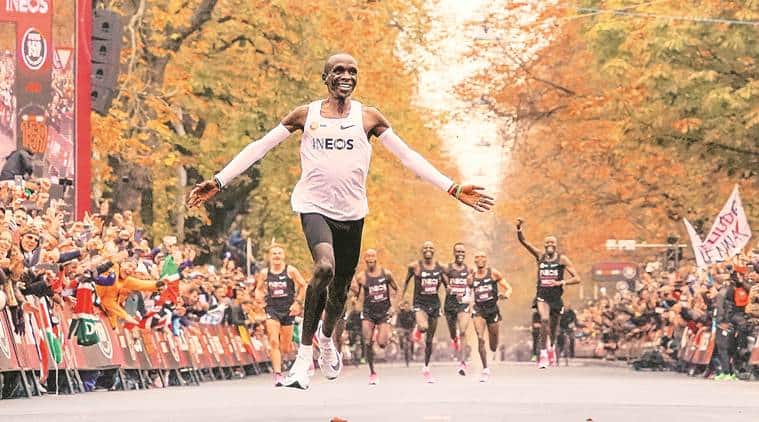