TORONTO — The cheers started rolling in at 6:16 p.m. ET. DeMar DeRozan exited the tunnel at the Scotiabank Arena to conduct dribble exercises at midcourt. The ball made a million infinity loops between his shorts — black and white with no red— while iPhone cameras flashed, the announcers started and a crowd of fans who showed up 44 minutes early watched. They started up again at 6:55 p.m. when he re-emerged for the beginning of the game, and again at 7:10 p.m. when his name was announced in the starting lineup for the San Antonio Spurs. And then again, as faint MVP chants broke out when he took his first trip to the free-throw line.

Toronto’s love for DeRozan is unconditional and unflappable. It doesn’t need to be orchestrated, although it was, with a tribute video that spanned his 10-year career, from his rookie season to the dunk contests to the All-Star Games, and the many firsts he shared with the franchise: the No. 1 seed, the Eastern Conference finals, the 48-win season, the 49-win season, the 56-win season and finally the 59-win season, his last in a Raptors uniform.

He didn’t know how he would react. He didn’t want to make predictions either, trying to read and react and take things as they came, as he did in a 23-point, eight-assist performance for the San Antonio Spurs that was smooth until the game’s critical play, when Kawhi Leonard stole the ball from him at half-court and dunked it home. “Walking off the floor it hit me more than anything,” DeRozan said Friday night. “Just a feeling of knowing what it’s like walking off that floor, whether it’s from playoff games, the good, the bad, the ugly.”

DeRozan didn’t get his big win. In fact, he fumbled it. But he did get closure. “It feels like it’s my last little piece of closure,” he said after the game. “Being able to come here and see so many faces, get that kind of burden off my shoulders.” So did Raptors fans, who started the night missing DeRozan and ended it with “MVP” chants for Kawhi Leonard.

The preamble put into focus that trading DeRozan — even if Leonard walking at season’s end would just speed up an inevitable rebuild, the spin goes (mine included) — was a real risk. He was loyal to Toronto’s bone-chilling core. He was one in a city of transplants who came alone and built a togetherness. “I always look at myself as the outside, as an outcast,” he said Thursday. “When you’re here you kind of got that feeling of being in your own world. And that’s one thing I definitely miss. You’re part of the city. You here. It just felt like a bubble when I was here, and I definitely miss that.” In searching for a higher love, the Raptors gave up the one they’d always have. The results of the game put into focus that the gamble was worth it.

Fifty-fifty balls started to bounce toward the direction of justice. But only for a time. Mostly, there is no justice in basketball. Its constant repetition — 103 possessions, in this outing — punishes the underdog and endows the game with the rigors of a hard science.

Conduct the same experiment over and over, the outliers disappear. Give Leonard enough pokes at a player of DeRozan’s caliber, and he will find a way to rattle him. It happened in the playoffs from a superior player, every damn time, and it happened in the game’s most critical play Friday night.

DeRozan, who was just a little more control away from clinching the game, crashed into a trap laid out by Kyle Lowry — his best friend and former running mate — and Leonard, who just knew when to poke at the ball. He always knows, which is how he pried it out of DeRozan’s hands in the final 20 seconds and dunked, and why he is a Raptor and DeRozan is a Spur.

“We hang in and figure it out,” Nurse said after the game. “We act like we’re expecting to figure out a way to win a lot lately.” That’s not random. It’s intelligence and skill and repetition.“I could see ’em saying, ‘Don’t foul,’ to each other,” Nurse continued. “I could see Kyle — ‘We’re not going to foul,’ telling [the refs] that. Really, really heads-up play by him.”

Trust Leonard, who has never minced words, to distill things down to their core. “DeMar did a great job here with his nine-, 10-year run,” he said when asked about the fan reaction. “Tonight, the fans came out and showed him love, but they still knew what we were here for and that was to get the win.” 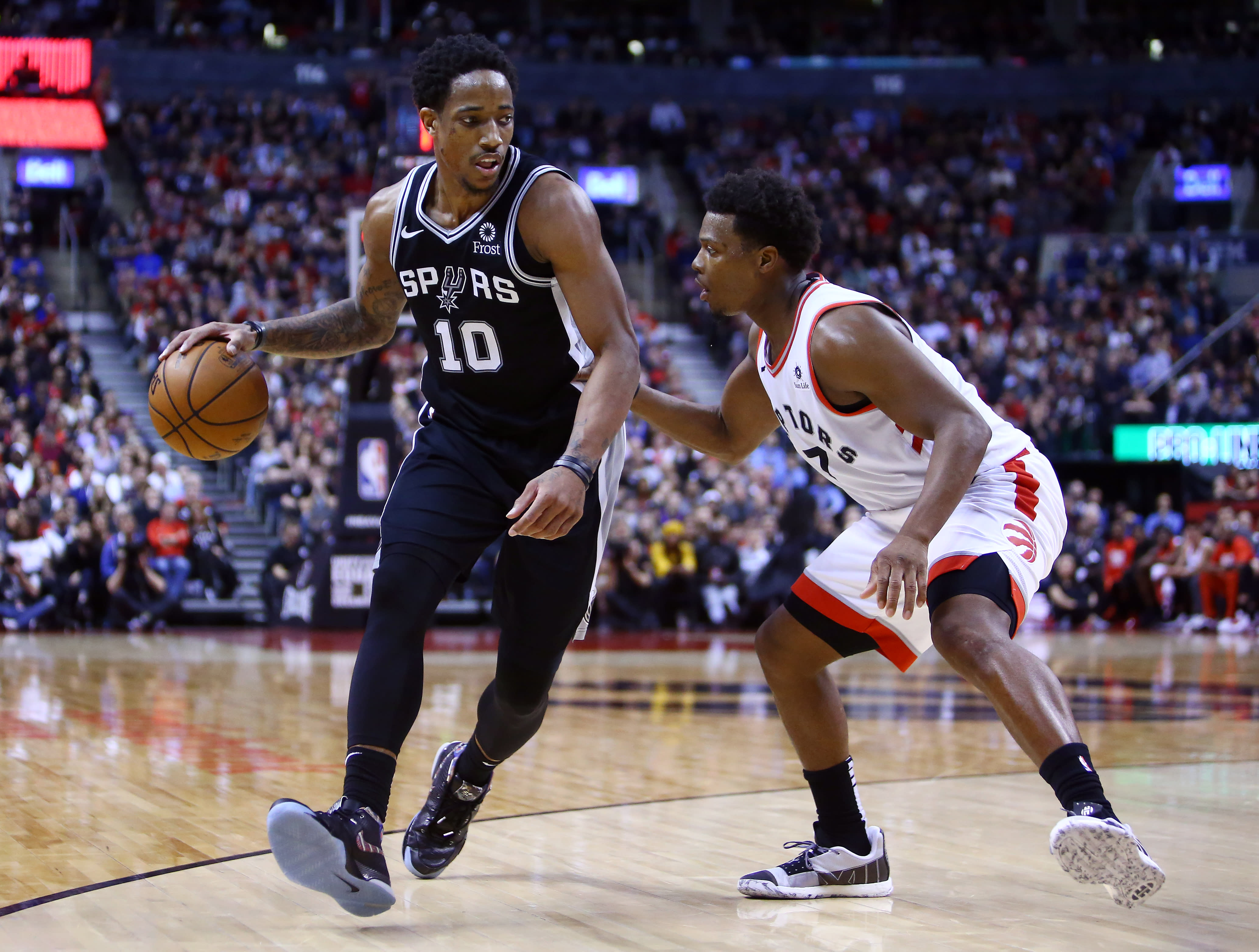